With new construction it is a straight forward process to utilize designed restrained lengths to eliminate the need for thrust blocks (see Connections Bulletin PD-01). Even very long restrained lengths for dead ends that can, depending on size or soil conditions, require 100 or 200 feet of restrained pipe can be constructed. But what do you do when you have to modify an existing system and it is not practical or affordable to dig up a long length of pipe and install split restraints? What if the length of pipeline is located beneath a paved area that can’t feasibly be disturbed to make the necessary modifications?

A unique solution to this issue can be the thrust collar. A thrust collar is usually a concrete block that is designed to be poured around the pipe and keyed into the undisturbed soil on each side of the pipe. There must be some kind of anchor on the pipe in order for the thrust developed at the pipeline to be transferred to the collar and, as a result, transferred to the undisturbed soil. The size of the thrust collar should be determined using the passive bearing strength of the soil in the same manner as designing a conventional thrust block.

The anchor can be solid or split restraint that is installed on the pipe with the thrust collar poured around it. It is important to remember that wedge style restraints like the EBAA Iron MEGALUG products for ductile iron pipe (the Series 1100) and PVC pipe (the Series 2000PV) only resist thrust in one direction. If it is possible that the thrust load at the thrust collar can be in either direction you must utilize two restraints. This is shown in the following image. 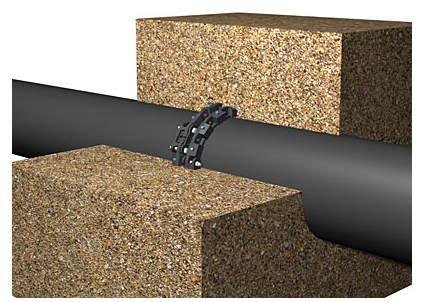 When used in this manner the restraints must be wrapped with 16 mil polyethylene sheeting so that concrete does not intrude into the wedge pockets of the restraints and prevent the wedges from gripping properly.

An example of this is an existing pipeline underneath a busy street that must be terminated or temporarily stopped in order to make modifications to the layout of the line. A small excavation can be performed so that the restraint and thrust collar can be constructed prior to the modification work. This allows time for the concrete to cure. When it is time to make the modifications the valve can be closed, the line cut, and modifications can be made in a safe manner.

In a similar manner, another way the MEGALUG restraints can be used is install them on the pipe so that they bear against the thrust collar. This method can be useful if it is possible that a thrust force could transit from a pipe, through a wall, into the open space of a building. Or it could applied at an exposed pipe and it is important to isolate pipe movement or thrust force within a structure. As shown in the picture below, this is the case with an EBAA Iron EX-TEND® expansion joint inside of a vault. 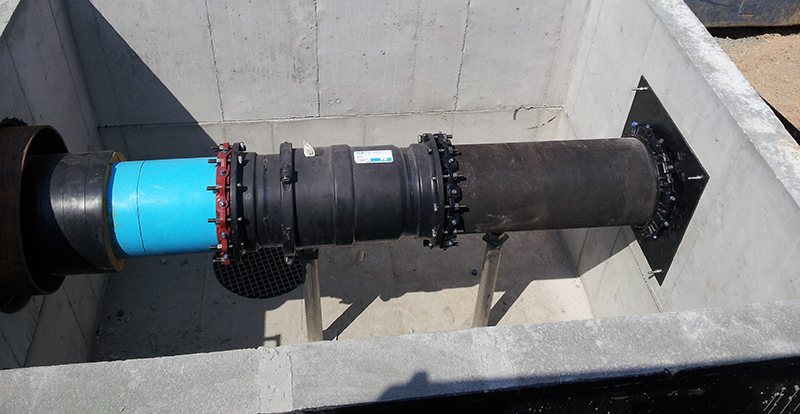 The PVC pipe in this example crosses beneath a bridge and the ductile iron pipe takes the waterline back into the soil. Designing in this manner isolated all movement to the vaults on each end of the bridge and the piping between so that the movement could be absorbed by the EX-TEND expansion joints. In this case the designer used a steel plate on the vault wall to distribute the force at the 1100 thrust anchor to the vault wall.

Something similar could be done when a pipeline exits a building and enters unstable soil where a FLEX-TEND® flexible expansion joint is utilized to protect the connection against settlement activity.

EBAA Iron joint restraint products are typically used at pipe and fitting joints. However, as just demonstrated, it is possible to use them in many other creative ways.

Since introducing its first patented product in 1968, EBAA has continued to lead the way in innovative products for the water and wastewater industry that are engineered to save time and money. EBAA is the only manufacturer of the world famous MEGALUG® Mechanical Joint Restraint. EBAA specializes in water and waste-water pipeline joints and is 100% MADE IN THE USA.